Discoveries are frequently the result of accident or are coincidental to another area of research. The topic of this study was just such a coincidence while examining the efficiency of Palaeolithic bifaces as butchery tools. 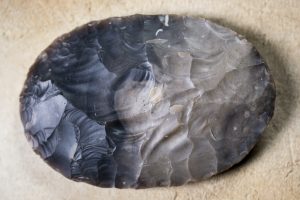 The initial area of study was to test certain aspects of the bifacial, ovate handaxe to discern its efficiency in processing a deer carcass, whilst testing theories I have developed over many years of knapping and working as a bushcraft instructor.

The first test is something of an old one and it is acknowledged that efficiency has been examined before as well as the most effective grip of the tools. However, it was decided that this experiment would be repeated to see if anything new could be gleaned from the exercise.

Previous studies have shown that well-made ovate handaxes are more efficient than modern knives at processing the carcass of a larger animal, though speaking to some of the people who have carried out this work, including a family member who is a master butcher; most have used the handaxe as a single directional cutting tool whilst working on a butchers table. I am not sure this is necessarily a good approach as in most cases surely an animal would have been processed from above as it lay on the ground, certainly if it was a larger animal, or strung up if it was something of red deer size. Having worked on animals from both angles it is not only easier to work at speed with a single directional cut, but both position also allow for a two way cut which is achieved with a bi-directional swinging motion, the natural motion of the forearm. This increases speed and affords not a slicing affect but a ripping affect. This may or may not have been an important factor in the Palaeolithic, but if predation of fresh kills was a factor, speed would surely have been of the essence. I’m sure personally that the recognition of a single fresh predator paw-print would have inspired me to cut in something of a frenzy!

The preferred grip of the bifaces in the instances of most butchers was that the tool can be used to best effect when held between the thumb and fingers so no contact is made with the inner thumb joint. However, this grip is not immune to the slipping of the tool which could potentially cause serious injury to the hand. During my experiments it quickly became clear that with respect to grip, the missing factor was almost certainly the blood of the animal, as once the hand and tool are covered, the coagulation ‘stickiness’ of the blood adheres the hand to the tool perfectly after just a minute or two. Once adhered to the tool, the force of the cutting motion can be greatly increased as the weight of the tool and the arm can be employed to make deep ‘ripping’ two way cuts. 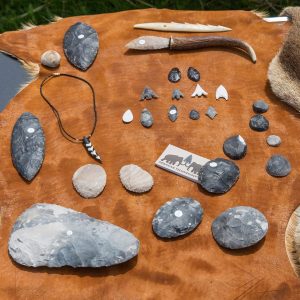 Alfie the Goat’s legacy lives on – the skin here belonged to him and now travels with me to bookings!

experiment; this was something I must confess I had mixed feelings about as I knew the animal ‘Alfie’ and he was a delightful little chap! For those who have seen me on my demonstrations or workshops, ‘Alfie’s’ skin takes pride of place on my replica display tables. The bifaces worked perfectly on a small goat as long as it was on the ground. As soon as it was lifted onto a table the freedom of the bidirectional cut became far less natural and was replaced by a less efficient sawing motion. However, where Alfie’s coat was longest I noticed that the serrated edges of the tool began to glide over the coat rather than cut straight through to the flesh. As a result I waited for a much longer haired animal to keel over on a local farm and the experiment was repeated on a much coarser, longer coat. This proved very interesting, as the serrated edge of the tool became engaged with the hairs of the coat which prevented cutting to the flesh with speed. The perfect tool for this part of the butchery process was in fact a thin un-retouched edge which found its way between the hairs and cut straight to the flesh with a single motion of the arm.

This was very interesting as it led me to think of the practical issues of the tranchet handaxe, a bifacial roughly teardrop shaped bifaces with the combination of both types of cutting edge. The purpose of this tool has been debated for some time as the function of the tranchet removal scar has never been examined practically. It struck me as a possibility that the tranchet removal ‘sharp’ edge may have been used to make the initial skin cuts to open the carcass, and possibly to remove the skin for processing. Then the entire cutting edge of the tool may have been used to rip through the flesh of the animal to produce cuts of meat that were easily transportable.

This idea was mentioned to Matt Pope and his response noted that the only evidence of use wear polish on these tools was of meat. However, perhaps this should come as no surprise; if the tool was only used to make 20 incisions with the sharp tranchet feature, but hundreds of cuts into the fibrous meat which has a far higher abrasion effect, any evidence of skin cutting may have been removed or obscured.

During the experiments, fresh, sharp edges were utilised, but found to be brittle and problematic and difficult to hold, certainly dangerous to use as speed. On several occasions the flake and blade tools struck the bone; small fragments of the flint cutting edge were detached and would therefore be left in the meat to be ingested. I would imagine that if this material didn’t hurt on the way in, it would have been problematic on exit! Moreover, the stomach being a muscular organ, these fragments may have led to infection and potentially death. Serrated robust edges were far less likely to leave such traces in the meat and would allow for safe grip and far faster processing.

The real ‘accidental’ discovery of this experimental work was the result of the animals blood on the surface of the tools used. Every knapper, I would imagine, holds on to a few items they make now and again due to the aesthetic attractiveness of the piece (or, if using the tool, for the effectiveness of the cutting edge). I kept one such handaxe for several years and used it to butcher 12 deer carcasses. Not only did the tool never require any retouch to sharpen it in this time, it also began to display alteration to the surfaces. The ridges of the tool began to display a gloss and the entire surface of the tool developed a lesser ‘sheen’.

This effect was entirely due to the coagulation of the blood which began to form a paste. With the constant movement of the fingers against the tool surface, the paste appears to have behaved almost like a jewellers rouge paste, polishing the surface features.

I have examined many Neolithic polished axes over the years and wondered how, in some cases, the finish was considerably glossier than I had been able to duplicate using sandstone or finishing methods such as sand on leather or flint dust, resulting from abrasion, on leather. However, I have used grain stems as a rubbing material which work well when laid down as a mat and the axe is rubbed with force against them, but if blood ‘paste’ is applied as a finishing compound, and buffed against the axe with damp leather, the finish is exceptional and produces a fine gloss finish.

The hand axe mentioned was presented to Jill Cook at the British Museum exhibition ‘Ice Age Art – Arrival of the Modern Mind’.

In conclusion, it is possible that Palaeolithic bifaces that emerge from un-disturbed contexts yet display a level of gloss on their surfaces, especially the ridges and other raised features, may display a certain level of this ‘blood polish’ as a form of use wear.

In addition, the Neolithic polished axe manufacturers may have employed the same technique with the intention of producing a high gloss finish on high status items. I have never closely examined any of the jadeite axe heads or whether blood paste might have the same effect on this material, but it would certainly be a worthwhile experiment.