The Venus of Willendorf, as sculpted by Eolith Designs.

I do a lot of work for the British Museum and while I was there demonstrating for the Ice Age Sleepover, I was lucky enough to be given a VIP tour of the Ice Age Art: Arrival of the Modern Mind exhibition. The sculptures on display are simply breathtaking, and I would urge you to go see them if you haven’t already.

One of the great things about my job is meeting other likeminded people who make a living from working with their hands using the same  materials and techniques our ancestors would have used. I’d like to share the work of other small businesses with my visitors and the first in a series of ‘Spotlight’ articles is Cobweb, the artist behind Eolith Designs. Go take a look around his site, and then read on for an interview.

‘I spent a lot of my childhood in museums, and stately homes, and it has left me with a deep appreciation of strange and ancient things in glass cases. So some of what I do is driven by nothing more than the desire to have my own collection of strange and ancient things, even if I have to make them myself. I’ve no formal archaeological background, but I’ve always had an interest in the subject. I read excessively and try and keep up with new discoveries and ideas, and I have archaeologist friends.

I’m particularly interested in the Ancient Near East and pre-Roman Britain both of which lead me by a circuitous route to the Languedoc. Initially it was the medieval history of the region that caught my attention but it wasn’t long before I discovered it had been much more exciting in the Upper Palaeolithic. I’m currently mildly obsessed with Ice Age art and the Magdalenian culture in particular.’

How did you choose which pieces to include as ‘Artyfacts’ in your collection?

‘I’ve yet to create anything that doesn’t owe something to an artefact or two. I use sculpture to explore the ideas behind things. I try as much as possible to get inside the heads of our ancestors and try and work out why they did what they did and why they thought it was important. Sometimes that means taking elements from different times and cultures and combining them in new ways to create something that is uniquely mine. Sometimes I realise that one particular piece is the perfect expression of what I’m trying to understand, and nothing I can do will ever be able to add to that. Those ones end up as Artyfacts.’

Do any of the pieces you’ve chosen to recreate have a special significance to you?

‘They all do, but I think Venus is probably closest to my heart. The Venus of Willendorf is most definitely my favourite piece of sculpture ever. She may account for my rather unique view of what constitutes a long time, my belief in human devolution, and my understanding of what civilised really means. She’s absolutely perfect. When we were beginning to think about farming she was already fifteen thousand years old (give or take). I have no idea what or who she was; human, divine, or a little of both. What I do know is she touches me more deeply than anything that’s been created since.

That feeling is something I’ve often tried to capture. My first experiment with digital art (long since lost) was a picture of her called “Mother is the name for god on the lips and hearts of all children”. I can’t remember if it was any good, but it probably says a lot that it was the first thing I wanted to paint. I made her into a pendant when I used to make jewellery. She was about an inch long and I did her in bone and bronze finishes. I thought I’d sold them all but last year I found one hidden away in the attic and I’ve been wearing her a lot since then.

She was the fourth piece I created for Eolith Designs. The first three had all been very masculine and I needed a break from that. At first I wanted to create a “tribute to” rather than something that looked too much like the original, in the end it wasn’t a decision I had to make. Once I’d started she took over and pretty much made herself. There are only so many ways of doing it as I’m sure her original creator found out.

The process of sculpting her made me see her very differently than I had previously. She’s a big girl, but she’s also surprisingly delicate. There is something about her neck, her shoulders and arms that give her a grace and vulnerability I hadn’t really noticed before. She isn’t some grand old matriarch looking on benignly. She’s young and surprisingly sexy. I don’t get “mother” from her at all anymore.’

Which piece are you most proud of? 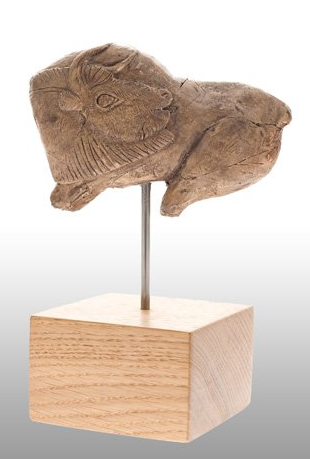 Inspired by a find roughly 14,000 years old, the bison sculpted by Eolith Designs is one of the designs the British Museum are selling.

‘Currently that would be my Swimming Reindeer. It was made for the “Ice Age art: arrival of the modern mind” exhibition at the British Museum. They sent me loads of very nice photographs to work from which forced me to work in a completely different way than I usually do, and it’s the closest I’ve come to a reproduction. Just being asked was probably the highlight of my career, but I’m very pleased with the way it turned out and with the reception it received.’

How do you envisage your work being used/appreciated by the owners?

‘It depends on the person and the piece. Most of my work has a historical or mythological basis, usually both, and people tend to approach it from one of those directions. It attracts a peculiar mix of the spiritually and the scientifically minded.

I’m not particularly concerned with what people see in my work, because these things are intensely personal. The thing about art is that it’s always bigger than the person who creates it. It has a life of its own in other people’s thoughts. One thing can mean so many different things to different people and to the same person at different times. I often go back to something and find something else. My only hope is that people appreciate how much hard work and love has gone into each piece and that they enjoy the results.’

How important do you think texture, colour, and the tactile nature of artefacts are?

‘Paintings are made to be looked at but sculpture should be touched. It has to feel right as well as look right. To me authenticity is all in the feel of something, so everything I make is made for fondling. It’s why I’m very picky about the materials I use and spend lots of time experimenting.’

What’s next for Eolith Designs?

‘Once the exhibition at the British Museum has finished and I’ve had time to catch my breath we shall be adding the Swimming Reindeer to the Artyfact section of the website so it will finally be possible to buy it direct from Eolith Designs. Then I’ve got quite a backlog of new projects I can get started on. First up are a pair of mythological figures based, quite fittingly, on ideas from the end of the Ice Age and the move from hunting and gathering to planting and herding. After that I’m probably going to attempt an interpretation of the White Lady of Brassempouy. It’s worth liking the FB page if you want to keep up with progress.’

If you are an archaeological, primitive technology or similar business and would like to be featured in the Spotlight, send me an email via karl@primitive-technology.co.uk