During my work experience for my Archaeology degree I was lucky enough to be accepted by the British Museum, to assist in the transfer of the prehistoric collection from Franks House to the Bloomsbury site. This move never happened, but nonetheless I was able to see some of the lithic material from many different collections held by the museum. 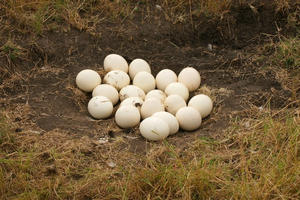 One collection I was tasked with re-cataloguing was from Kharga Oasis in Egypt; this collection had material ranging from Palaeolithic bifaces and Levallois flakes, to Neolithic material, and I gained a great deal of identification knowledge from this experience. I also had the pleasure of working with both Nick Ashton who has remained a good friend and the late Roger Jacobi, a genius in the field and someone who helped and inspired me a great deal.

During my rummaging through the Kharga Oasis material I came across one drawer full of ostrich egg shell beads, tiny polished works of art in their own right. There were three stages of the manufacturing process represented in the drawer; rough blanks, drilled blanks and then the ground and polished finished product. Alongside the polystyrene cut-outs for the containers, was a bag of ‘waste material’ and broken sections of egg shell. I have a deep fondness for bags labelled ‘waste’ as I have been presented with many over the years (usually lithic material from field walking surveys) and have always found one or two pieces that have not been noticed or recognised due to their rarity or obscurity. This bag however held something that had not previously been recognised.

I was working just round the corner from ‘Roger’s bench’ (as it shall ever be known), and I set to examining the waste material. While I was sorting I noticed a distinct repetition of certain shapes which didn’t have the typically random fractured edges, but displayed grinding or retouch of the edges. I began to categorise these shapes and realised that they were exactly the same as the geometric shapes I have observed in lithic collections dating to the Mesolithic. Roger had left his desk and in his absence I lined up a selection of the different shapes of the egg shell ‘microliths’ and left them for his return. I hadn’t heard Roger use a great deal of foul language during my time at Franks House, but I was made aware of his return by a torrent of expletives which ended with “where on earth did these come from?”

I crept round the corner and said ‘Kharga Oasis’ and that I thought they were geometrics. Much to my delight Roger agreed and we began to examine more of the waste material. The result was that a good proportion of the fragments were ground and shaped to exactly those of the Mesolithic lithic material we find throughout the international Mesolithic record. To date this has not been published and I had hoped to prepare something with Roger. I now intend to return to Franks House to examine the material again and carry out experimental research to determine how this material was shaped, and also to examine for any indication of use wear or impact fracture.

So, next time you are bagging up ‘waste’ from a site… take a second look!