Scrapers often get a bum rap from archaeologists for being intensely boring – probably a result of the fact that you can’t dig a prehistoric site in most of Europe without practically falling over the things. I have a huge fondness for the little blighters though, because as a novice knapper, scrapers are where it’s at in terms of getting to grips with basic flintworking techniques; in fact, the first time I met Karl (in 2011) was at West Dean, where all first years at the Institute of Archaeology to learn a little about experimental archaeology, where I made my very own scraper.

So why are scrapers ideal for beginners? Well, to begin with, they are unifacial – worked from just one side, unlike handaxes, which are worked from both sides to create that super-effective cutting edge. This means there’s no need to worry about keeping the edge straight, or accidentally slicing your fingers while working. Making a scraper can be done with a small pebble, like the selection pictured in the last post from Padawan’s Corner. As Karl always says during his demonstrations, knapping flint is about getting the angle right rather than hitting the flint really hard, and scrapers are a great example of this; get the angle right and it’s like breaking toffee.

How do you get the right angle? Well (excuse me, ladies) it’s about getting your knees apart and having your elbows resting comfortably on your thighs, so that you can swing your hammerstone hand through a smooth downwards arc without hitting yourself. The follow through on the swing is really important to help you get the flint to break cleanly. Holding the hammerstone properly is very important too – don’t use a limp wristed ‘chimp grip’. That will just cause you to either strike your fingers and not the stone, or your hammerstone will just skip over the flint and not detach little flakes the way it should. Lastly, you have to ensure you hold the piece of flint at a nice steep angle, and strike at the lowest part (you rotate the flint in your hand to change the place you are striking). Your wrist should be doing most of the action, use it like a hinge to ‘snap’ your hand down through a smooth arc. While you don’t need a lap cover, like you would for making handaxes, you do still need to take steps to avoid getting flint chips in your eyes; all the debris should fall straight down, if you’ve got your angle and striking right, but don’t take chances! So that’s how to do it right – let’s take a look at one example of what happens when it goes wrong.

If no flint is breaking off while you’re striking, chances are that you’re holding the flint at too shallow an angle. Change your grip so that the flint is held at a 45 degree angle. Make sure you’re making contact with your hammerstone and not your fingers! Alternatively, it could be your striking that’s the issue, not the angle – you need to be hitting the flint about a mm in from the edge. If you’re not close enough to the edge to detach a flake, you’ll get tell-tale little white ‘spots’ on the flint (see below). Check your positioning and take a few slow swings to get your eye in. 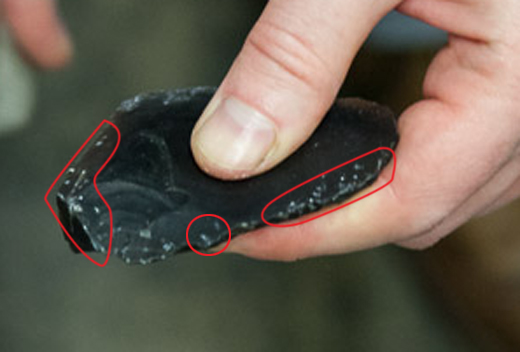 The white marks are where blows have been struck too far away from the edge to detach any flint.

When you’ve finished your scraper, or at least if you’re anything like me, you’ve gotten to the stage where perfectionism has been defeated by the fear of breaking it, then it’s time to dull the edge down. So far while we’ve only worked from one side, we’ve still made a reasonably sharp edge, and for a scraping tool, that’s a nono. Hold your scraper at a steeper angle than you did to make it, and using a flat surface on your hammerstone, grind it gently but firmly straight down, over the bottom edge of the tool. Rotate your scraper through your fingers, always grinding in a vertical plane straight down, until the edges are blunted. Now you can scrape skins and hides without tearing jagged holes in them!

As someone who is pretty tentative when it comes to learning new skills, especially physical ones, this is the perfect exercise to gain familiarity with the flint and its fracture mechanics. I’d read about how flint fractures, but nothing beats the tactile signals you’re getting through both the flint and your hammerstone as you get that angle perfect and the flake practically throws itself off the flint before you’ve hit it.

Turn your back for 5 minutes, and look what happens. Idle hands, and all that…

This is also an excellent introduction to knapping for children; Karl runs workshops for kids from 8 or 9 onwards, and he’s yet to have anyone (young or old) fail to turn out a museum quality hide scraper. I like to make scrapers as a warm up before I try anything more adventurous, and to keep myself occupied while Karl’s demonstrating. You can see me gurning merrily away (right) with a selection I knocked out one summer’s afternoon, in a spare hour.

See you next time!

If I had a hammer
Mostly ‘armless